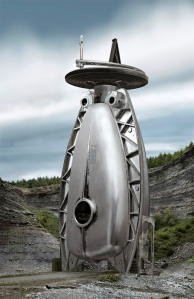 “If I had let go, I would have killed two people.”

According to David Trautrimas, it all started with a broken vacuum cleaner. That is, his quirky preoccupation for turning ordinary objects into the most extraordinary contraptions. In his latest series, The Spyfrost Project, currently on show in the Empire of Dreams exhibition at Toronto’s MOCCA, Trautrimas has completely discombobulated a record player, a chainsaw, some microscopes, floor polishers, and a large potentially life threatening refrigerator.

Undoubtedly, the unveiling of the truth behind his cold-war tinged photos only contributes to their charm. Trautrimas admitted to me that a guest at the opening excitedly divulged that they had seen the very buildings in his photographs while riding the trans-Siberian express. The intense realism of these non-existent structural oddities comes from literally hundreds of obsessive hours tweaking minutia on his 24” apple monitor.

Throughout our discussion Trautrimas’ boyish face lights up at the chance to elaborate on his fanciful artistic inspirations. I invite you to imagine the artist as a child with a quiet, intelligent demeanor. The kind of child whose silence is one of a dreamer’s disinterest, broken only by one special topic of absorption. Judging from his art, this subject for him may well have been the idea of “the future.” That future that we all looked forward to with the flying cars and space age buildings fit for anti-atmospheric conditions.

It seems likely that these structures have been lingering somewhere in the artist’s imagination well before they were revealed to the rest of us. Adding to this impression is the look of age surfacing his architectures that comes from their past lives as more mundane devices. It is almost as if he is revealing to us a nearly concrete, now jaded vision of this past future from his childhood.

The solidity of these photos makes it hard to believe that these structures only exist in imagination. His chronic habit of radical distortion of scale forces him to take hundreds of photos with varying depths of field to preserve a unified illusion. At times he also adds actual architectural details such as doors and windows culled from an extensive catalogue of personal photos. The final re-purposed structure is laid overtop of the artist’s own masterfully rendered sky-scapes.

The desolate rocky wastelands housing his constructions also come from photos. These ones extracted from his amateur geological explorations of some of Ontario’s most beautiful panoramas. On this topic, Trautrimas once again reveals a childish glint in his eye. For that reason I found it unsurprising that the theme behind his newest project centers around geological core samples. The work, entitled Sweet Sediment, is a public art project funded by the “Build Toronto Mentorship Program.” It’s scheduled for installation in the Corus Quay at the foot of Jarvis in mid-July.

David Trautrimas is represented by LE Gallery in Toronto.

“…my intention is to create a disorienting sense of history…”

I happened upon the work of abstract painter Julie Gladstone during the last open studio event at Walnut Studios a few weeks ago.  Located at 83 Walnut Avenue just south of King Street, the studio has been operating as an art space for just over 3years and is the creative home to around 40 artists working in an impressive range of media.

The abstract catalyst behind Gladstone’s vibrant and deeply textural works started to make sense to me when I noticed a nearly decimated can of Arizona Green Tea in her studio space. The fragmented remains of the aqua sky and sweetly graphic cherry blossoms were surreptitiously perched next to her business cards.

Struck with inspiration for the well-worn theme of decay while exploring the industrial wastelands of the entropic paradise we call Montreal, she began innocently enough by editing these departures into contemporary landscape paintings.  Eventually, as instinct began to replace representation, her vision contracted within these well-explored degenerate panoramas to focus on accidental encounters with composition. Gradually Gladstone’s method; a combination of liberal additions of latex, oil and spray paint combined with an archeologically imbued chiseling process; began to unleash her from the creative bindings of representation. She was released into a self-described alchemical process of abstract painting.

For Gladstone it seems as though the very act of painting is mimicry of the cycle of change in the urban environment. What started as an exploration of decay has become more about becoming. Imagine the painter engaged in the supernal chronicling of the ever-evolving assimilation and reincarnation of copious random visual stimulus around her.

Looking out beyond her curly blond hair Gladstone winces at the need to justify herself as a painter. She pulls her knees to her chest curling up in relaxive defense, “In a culture so saturated by images trying to sell,” she begins, “why should I have to justify making images for the sake of beauty?”  The emotional intensity of her process is evident in the vivid, heavy concentrations of colour and simultaneous patches of violent reduction. I can’t help but notice that her own interpretations of her practice- ideas of life, impermanence, rebirth- mirror eastern philosophy.

Emotionally her creations are the collage of experience and potentiality found in early expressionism. Her excessive use of materials makes one stop to consider making a comparison to the newly baptized “extreme painters” on show in Montreal this summer, but there is still insinuation of order. Her sometimes systematically carved lines and caked on surfaces evoke an aging Piet Mondrian (think Boogie-Woogie) with a Tammy Fay make-over. Thankfully this fresh-faced artist conceives of this painterly style of beauty as one better left on wooden panels.

Julie Gladstone works out of Walnut Studios in Toronto.

“My Toronto includes Saskatchewan.”
David Liss, Curator, MOCCA: Empire of Dreams
Last night the much-anticipated MOCCA show “Empire of Dreams: Phenomenology of the built environment” previewed at the Queen St. museum. The show features an impressive selection of Toronto based artists working in virtually all media. While each piece seeks to express our often intimate relationships to the constructed environment, the artists interpretations are predictably individual. In his speech, Liss summarized his philosophy for curation of the show, which was to keep the initial concept simple and “leave it to the artists to complicate things.”
A few highlights of the resulting artisanal complexities are Tristram Lansdowne’s arresting watercolour articulations of decrepit graffiti marred buildings; T&T’s fantastical sculptural and graphic explorations of utopian landscapes; Margaret Learns to Drive from There to Here– David Han’s suburban fueled multi-channel video installation; and a first glimpse of Dorian Fitzgerald’s seamless transition to seamless painting.
The real party is happening Saturday night when the show opens to the public. Gallery goers were tempted to return with the promise of more work including a first sight of Dan Bergeron’s new façade for the gallery. A piece of advice for prospective attendees- no need to sneak outside and choke with the smokers for fresh air- An Te Liu is looking after you as soon as you step in the gallery.
The show runs until August 15- check back here for select artist profiles throughout the summer.

Dorian FitzGerald’s glossy acrylic extravagance will be on display once again at the MOCCA in Toronto for the upcoming exhibition Empire of Dreams: Phenomenology of the Built Environment. The show runs from June 19, 2010- August 15, 2010.

Read more about FitzGerald’s work in my article in this summer’s issue of Canadian Art Magazine.

Comments Off on Dorian FitzGerald