The last time I spoke with Amanda Nedham, I was wandering through her tiny

corner of the studio she shares with two other artists, stepping carefully through her personal effects to get a look at her works in progress. I was immediately struck by the creative dedication of this young artist. Some of my first impressions are quite likely formed by my own sentimental romantic nature. From the relaxed security of the financial solvency of my thirties, the idea of building a wall in a dusty warehouse so that I could sleep in working proximity to my art sparks the same nostalgic emotions as watching a performance of La Boheme. 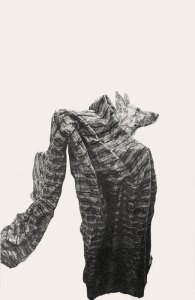 candor. A meeting with Nedham is invariably accompanied by an incessant commentary on history, art, culture, mythology, literature and other random intellectual etcetera. Her ramblings are refreshingly unabridged. Not only do they serve to accentuate her bohemian persona, but they personalize each of her carefully rendered images with her spiraling erudite inspirations.

Prior to their completion, the drawings go against the most common principle of drawing instruction. That is, to develop the entire drawing equally. Nedham’s drawings begin on the left hand side of the page, sliding away from her hands across an empty pencil drawn grid. Working in this direction to prevent smudging, she creates meticulous fantasies to illustrate her vast academic curiosities.

Like Milk and Blood, the title of her current exhibition on now at Le Gallery, is a tour through Nedham’s amateur anthropological research as shown through the furry friends of humanity. The most common mammalian motifs in the show are predictably dogs and horses. In Like Milk and Blood I a dog’s head enrobed in a heavy blanket of fabric stares upward in plaintiff loyalty. In Like Milk and Blood II, a similarly thick ream of fabric spills out from the inside of a horse. It seems an almost painfully literal metaphor of the triumph of domestication over the wild. 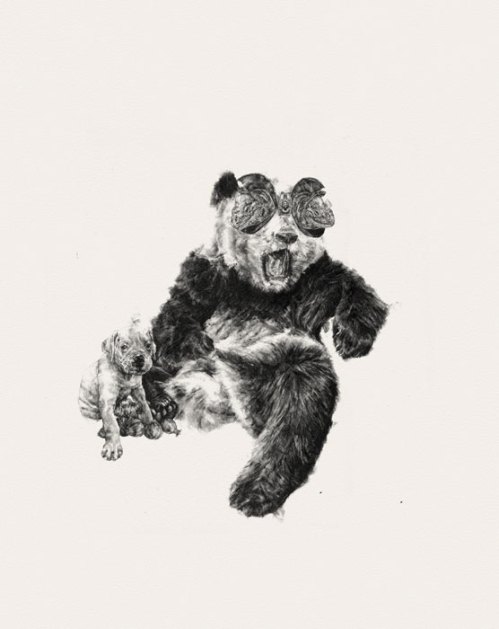 The intriguing appearance of more exotic species such as giraffes and pandas are unraveled for me in Nedham’s commentary. The Apology II shows a panda with its eyes covered in a reptilian horse shield. Nedham recounts a Chinese myth that explains how the panda got its black spots. In the story, the pandas become covered in ashes during their mourning of a young shepherdess who tried to save them from a leopard attack.

The convoluted details of her concepts can make her drawings hard to understand for the casual onlooker. For this same onlooker, the level of technical prowess makes up for this. The bear’s fur in the Apology I has softness reminiscent of a watercolour. The muscular definition of the horse in Like Milk and Blood II is shown with geometric precision. At this emergent point in her career, it is apparent that classical technique is the driving strength of her practice. Despite past experimentations with sculpture and mixed media, and even an original concentration on printmaking that garnered her the OCAD printmaking medal, Nedham’s currently clear focus on the development of her technical drawing ability is unwavering and impressive.

For Nedham, the past year has been one of dedicated practice combined with creative and conceptual experimentation. Drawn to the prospect of communicating her inspirations with more depth, Nedham speaks of attending graduate school- possibly combining her MFA with studies in the social sciences. It will be interesting to see how this intellectual expansion affects her practice. Will her illustrations of intellectual ephemera become less abstruse? Or will her work venture further into the realms of the surreal? Regardless, I look forward to them.

Like Milk and Blood is showing at Le Gallery alongside Tristram Lansdowne’s show, Archimancy, until December 19, 2010.

This entry was posted in Uncategorized. Bookmark the permalink.