Face in the House- Yu-Hang Huang

Yu-Hang Huang is from Taiwan. It’s no surprise however that the young artist spends much of her creative energy delving into questions about her identity. Huang was born in Taiwan but is of Chinese descent. In 2002, she traveled to Vancouver to study Fine Arts at Emily Carr. After her graduation, she moved once again to Chicago to complete her Masters at the Art Institute.

Knowing that her experiences at the Art Institute would be finite, Huang began thinking about the preservation of memories. With most of her time passing in the studio, she started constructing soft duplicates of her studio surroundings out of the same foam used in her architectural constructions shown in her current show Face in the House on now at A Space Gallery. 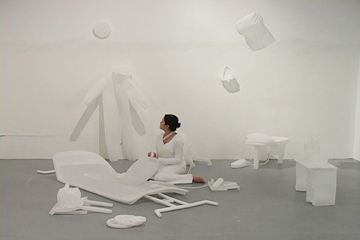 Her film at this exhibition, The Trace of a Production Site, shows the artist amidst her creations in an endless loop that recalls the cycle of an artist’s creative production. On a grander scale the loop mimics the endless repetitions performed in all people’s lives. Thinking about the gentle fading of memory and the artist’s intimately inextricable relationship between objects and production, Huang was beginning to look for a way to show herself as a completely mingled part of that environment.

The result of these initial explorations makes up the bulk of the current exhibition. In the large colour photographs that make up the Identity Correlations series, Huang is shown standing in various situations awkwardly disguised in Miyakesque architectures.  Her face, sometimes wondering, other times seemingly devoid of emotion, peeks out of the softly intricate reproductions. In another unsurprising turn, we find out that Huang studied fashion in Taiwan before deciding to pursue a career in art. 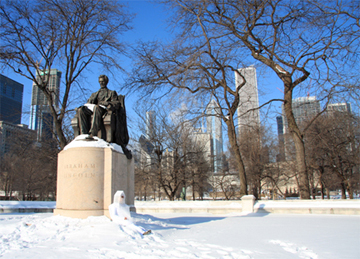 In the first photo from the series, Huang sits on the snow covered ground veiled in one of her white costumes. When she first saw the image of herself, poised in front of a massive statue of the late American President Abraham Lincoln, Huang was struck by how insignificant she appeared. The photo was taken while she was living in Chicago during the Obama elections. The artist describes wrestling with her international identity during such a prominent historical time. The forlorn homeless appearance of her figure in this portrait came to her as a “happy surprise.”

In later photos, Huang’s outfits become exacting copies of the buildings she stands amongst as she continues to question the concepts of identity and human insignificance.

Currently, Huang is beginning to think about her next solo exhibition, which will be happening at the New Taipei Cultural Centre, Taipei, Taiwan this March. She will be continuing to explore identity, this time concentrating on the idea that so much of our personal documentation resides in the energetic ether of the digital world.

Yu-Hang Huang’s exhibition The Face in the House, will be showing at ASpace Gallery until February 12, 2011.