I took advantage of a grandmother’s love and a spring-like day this past Tuesday to take a break from my new addition and visit Julie Gladstone in her new studio in downtown Toronto’s east-side. The Walnut Studio alumni is busy preparing for tomorrow’s start of The Artist Project as well as a group show coming later in the spring at Walnut Studios.

Gladstone admits that her work is possibly in a somewhat transitional phase. For some time, she has been working to near compulsive levels adding checkered patterns striping and spiraling over the layers of her work. To Gladstone, the checkers serve as a motif representing the man-made, which she layers over the existing organic abstractions of her previous style. 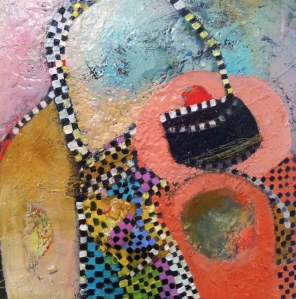 Like her earlier work, she remains concerned with topography, but has been focusing on the idea of maps as allegorical representations of life. With no routes planned out, Gladstone explains that maps are no more than labyrinthine projections of possibilities. Her current mammoth works seem to serve as Gladstone’s projection of not only random physical topographies, but also mazes of life’s moral challenges within one’s own spiritual quest.

Though the work she will be displaying at the Artist Project will be smaller in scale, Gladstone has been pushing the boundaries of her creativity by creating massive paintings (ie. 7’+). It’s not surprising to see a personality such as Gladstone’s working on such a formidable scale. Her explanations behind her abstract concepts reflect the constantly wandering mind of a philosopher.

Please note that a previous comment regarding Walnut Gallery has been removed, as it did not accurately reflect the intentions of the project. Sincere apologies to the directors and owners of Walnut Gallery.

This entry was posted in Uncategorized. Bookmark the permalink.